The year is 2019 AD. Musicland is entirely occupied by casting shows, idols or faceless plastic pop and suffers from declining music sales. Well, not entirely… One small band of musicians still holds out against the invaders.

For almost 30 years, Fiddler’s Green have been playing the role of the indomitable Gaulish Village among Germany’s indigenous rock bands. Their form of resistance against mainstream musical practices? Playing rocked-up Irish music as a German band. Where in the beginnings they were at times met with belittling smiles, the sextet nowadays is sitting prettier than ever and can rightfully claim to be one of the country’s most successful bands.

The band’s new album HEYDAY (release: March 8th, 2019) underlines this work ethic vociferously. Alongside producer Jörg Umbreit (In Extremo, Dritte Wahl etc.), the musicians captured 15 songs that indeed sound typically Fiddler’s Green on the one hand but also pack an unfamiliar yet very agreeable punch on the other. 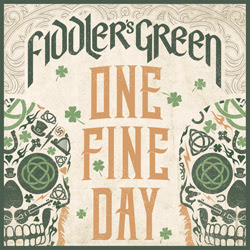 With One Fine Day, they actually show themselves pleasantly close to their punk roots. “Technically speaking you can’t even accuse us of getting slower”, Stefan notes with with a wink. “Other bands are frequently getting into a mid-tempo, whereas we never had a shuffle as fast as One Fine Day on an album.”
February 1st, 6pm CET the song will not only kick off the weekend with a Youtube premiere, it’s also an instant grat for pre-orders across all platforms.

One Fine Day is about a man who lives at a wonderful place with his wife, in a small house by the sea. He has arrived where he could easily stay for the rest of his life — however, the idyll is poisoned, there is a switchblade knife lying on the table right next to the flowers, ready to flip open and escalate the situation. “There are two tragedies in life”, Irish writer George Bernard Shaw states, “One is to lose your heart’s desire. The other is to gain it.”
The same is true for the narrator in One Fine Day: Overwhelmed by the love of his wife he can constantly feel tediousness melting away his lifetime. Without a clue where to go he wants to break out, yet still deep inside he remains tied to his longed-for place — restless and entangled in his inner conflicts.

Of course, the band will also be performing One Fine Day live across the republic and in neighboring countries, where the audience can expect exactly this bundled load of merciless playfulness and an Irish-folky punk rock hit explosion, which will leave no one standing still. Even after almost three decades, Fiddler’s Green still manage to surprise themselves and the fans, especially with their live shows. Although their new album HEYDAY, which is their 14th studio output, could finally make the band hit it big time: Fiddler’s Green will never make any compromises in order to reach that goal. After No Anthem, One Fine Day gives one more impression of this attitude.

This website uses cookies to improve your experience while you navigate through the website. Out of these, the cookies that are categorized as necessary are stored on your browser as they are essential for the working of basic functionalities of the website. We also use third-party cookies that help us analyze and understand how you use this website. These cookies will be stored in your browser only with your consent. You also have the option to opt-out of these cookies. But opting out of some of these cookies may affect your browsing experience.
Necessary Always Enabled
Necessary cookies are absolutely essential for the website to function properly. This category only includes cookies that ensures basic functionalities and security features of the website. These cookies do not store any personal information.
Non-necessary
Any cookies that may not be particularly necessary for the website to function and is used specifically to collect user personal data via analytics, ads, other embedded contents are termed as non-necessary cookies. It is mandatory to procure user consent prior to running these cookies on your website.
SAVE & ACCEPT